For those of you who have never encountered Biltong (my sympathies are with you) it is a coriander-spiced, dried, cured beef product, similar to jerky but vastly superior. Imagine, if you will, a really tasty dog chew.  I was introduced to this king of all bar snacks about a year ago by the South Africans in my life and have been raring to make my own ever since. Last weekend I decided to stop raring and start doing.

‘To dry will be an awfully big adventure.’

I opted to make two varieties of Biltong, one classic and one with a paprika kick. Thankfully the production process is a reasonably quick and after just four days of drying both batches are now ready to sample. The question is are they worth sampling? To help me come to a verdict on DIY Biltong I am joined today by genuine South African Bronjamin who will be providing her own expert opinion. But first a bit of background…

A bit of background

I swear that the etymology of bacon was exactly the same. Seriously people, stop naming food after buttocks!

Buttockstrip’s origins lie in the 17th century when Dutch, German and French seafarers first arrived on the sunny shores of South Africa with vats of pickled meat and colonial intentions. Of course the indigenous people of Southern Africa had been curing and drying livestock for centuries but it was the European settlers who first introduced the vinegar wash and coriander rub which give Biltong its unique identity.

Before this point rumour has it the meat was flavoured primarily by horse sweat. Migrating tribesmen would place strips of venison under their horses saddles where they was tenderised by the chaffing. I chose not to replicate this method.

Biltong should be eaten in quantity from a paper bag. Alternatively it can be added to muffins, breads and stews or used as a teething aid by hardcore carnivore babies. I’ve heard tell of Biltong-flavoured cheese spread but I choose to believe that humanity has not sunk to such depths.

2kg Beef:
One big slab of cow. For best results keep to lean and mean cuts such as silverside, topside or rump.
‘Ahem,’ *unashamedly mounts high horse* I won’t apologise for telling you to use local, ethically sourced meat. Never forget that a cow had to die for your enjoyment; make sure it died well.

125ml Wine vinegar: Red, white or a blend of both. Cider vinegar will also do.
100ml Brown sugar: Muscavado for those sweeeet sweet molasses notes.
30g Salt: Use coarse rock salt to avoid over seasoning.
15g Bicarbonate of soda
125ml Crushed coriander seed: To roast or not to roast, that is the question. The answer = yes
1tbsp Cracked pepper: Taste the rainbow variety.
1tbsp Something spicaaay! (optional): Hot or smoked paprika, chili flakes, cayenne pepper etc. Lemon-and-Herb-at-Nandos people may need to adjust this down. 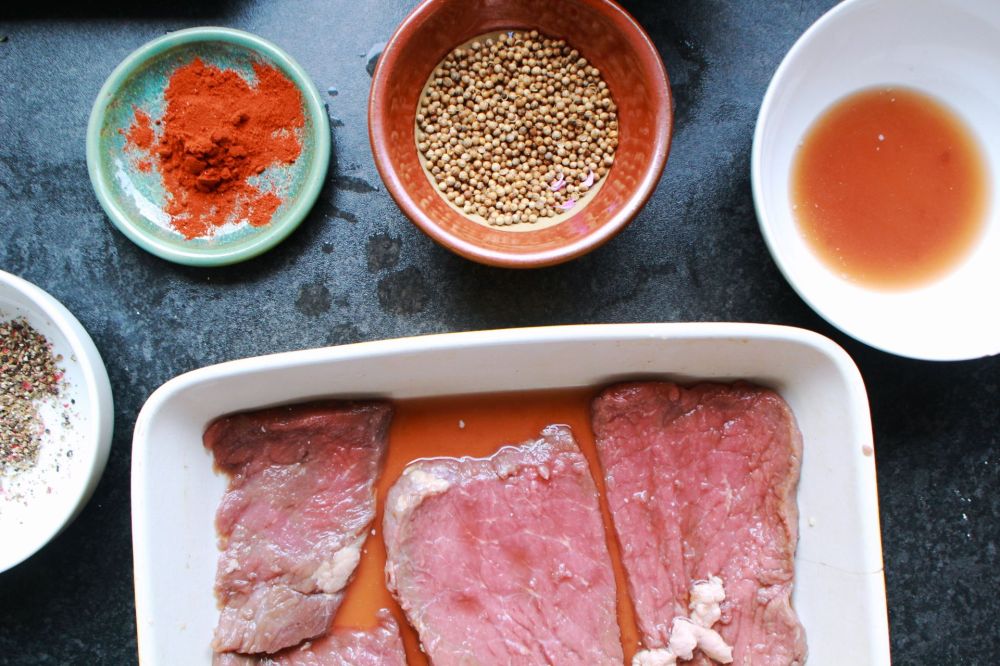 1. Slice the meat into 2cm slabs
2. Slather in vinegar and leave for 30 mins
3. Lovingly pat dry with a paper towel
4. Crush the coriander and mix with the remaining dry ingredients
5. Rub a dub dub (the spice into the beef)
6. Hang the meat:

This was not my first attempt at hanging meat. If you are a long time follower of this blog you remember my bacon-in-the-closet enterprise of last summer. Whilst the results of that operation were excellent I thought I’d attempt something a little more sophisticated this time round and so acquired a Biltong box*. This is essentially a well-ventilated wooden cupboard heated by a small light bulb at the bottom.

If you want to have a go at making your own Biltong box there are plenty of websites which offer advice. I can thoroughly recommend the following method:

A specially made box is very helpful for making Biltong but not essential. If you don’t have access to a parent with carpentry skills then try hanging the meat outside in a breezy spot.

Is it worth making?

2kg of silverside cost me £18 and the vinegar and spices cost maybe a total of £4. £22 may sound pretty pricey but bare in mind that I ended up with an outrageous quantity of Biltong, a dry weight of about 750g. Most supermarket varieties will cost around £4-4.50 per 100g so I calculate that I made a saving of £8-12. Of course I also had to pay to build the box. If I make three batches of Biltong this cost should be offset. Running the box costs approximately 60p, hardly top dollar.

Hands on time was maximum 1hr, this was for slicing the meat, vinegar washing, spicing and hanging. Walk in the park. Of course the real work here was in building the box (see bellow). I would therefore say the process is high effort for attempt one and low effort for subsequent batches. If you hang the meat au naturel outdoors then its low effort all the way.

It looks pretty gnarly, like something unearthed from an archaeological dig. It’s hard to believe that this thing was mooing less than two weeks ago. But hey don’t judge a beef by its colour.

What I had prepared to say: How incredible. Best thing I’ve ever eaten. You can taste the quality and the effort. Yada yada yada
The bitter truth: It’s very expensive edible shoe leather. I’m chewing a meat flavoured carpet tile…yep I’m still chewing it…this stuff is not going anywhere… On the bright side the flavour is fantastic.

‘The high-minded man must care more for the truth than for what people think.’

Bron’s comments: Let me chew over it for a while.

What I had prepared to say: Rude things
The bitter truth: I don’t respect it’s integrity as a foodstuff but I do love it. Hydrolysed soya protein and potassium sorbate taste so darn good with coriander.

Outrageously pricey ‘authentic’ Biltong I found in a deli

I don’t care it was too expensive to enjoy.

Alas this time round it was not a triumph for DIY. However now I have the box I will be having another go. I’ve added bicarb to the ingredients (see method above), which should make the meat softer. I might experiment with some different cuts of beef too. I’ll be sure to keep you posted.

*Not just for Biltong, for life

I cannot stress how useful this natty little heated cupboard has been. It really is an essential gadget for all areas of life. Here are just some of its many uses;